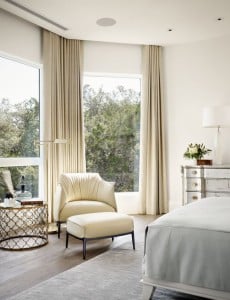 One of the biggest building annoyances revolves around ceilings, and often comes to a head when your customers start talking to their architects and builders about built-in pelmets, curtains and blinds. Many don’t know the correct terminology and may come to you with pictures like the one below, and pointy fingers:

This is a ‘recessed track’ and it’s very much in style – the curtain tracks are recessed into the ceiling and it screams luxe.

The thing a lot of people don’t understand is that recessed tracks are considered a major architectural feature, and they need to be thought of right at the very beginning of the design stage. But because a lot of people associate this decision with window furnishings – which is not part of building, per se – they forget to mention it at the beginning.

If this is the case for any of your customers, they may be able to save the look if built-in pelmets with a hidden rail has been factored in. The hidden pelmets may be able to be widened, so that they effectively turn into bulkheads. This would allow the hidden rails to mimic the effect of recessed tracks without having to rework the design in a huge way. See below:

Because the long, rippled lines of linen are so popular in celebrity bedroom photos, you might also find customers will be very satisfied with ceiling mounted tracks.

“Linen. Great swathes of linen with the sunlight glowing through them…”  Such a romantic look.  But they also need their bedrooms to be dark, they don’t love light when they are trying to sleep…

Suggest a double ripple-fold ceiling mounted track with two separate curtains or blinds.  An unlined linen curtain in front, a block-out behind (see image below). It’s perfect, the linen curtains can be drawn when they want a soft dappled light or privacy, and the block-outs are closed at night and are an extra thermal layer in winter.

The ripple-fold tracks are neatly mounted onto the ceiling, very unobtrusive, and window coverings can be pulled from one side right across the opening, and also stack on a single side.  This is a good option to save on dropping any height at ceiling level, and gives the illusion of higher ceilings with the long, vertical lines.