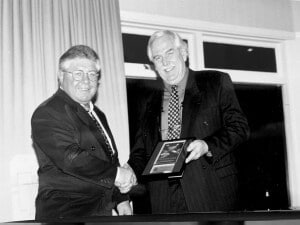 2020 is special year for Fashionline and is a year that deserves celebration. With so much uncertainty in the world right now, we feel very proud of our achievement.

When the idea for Fashionline first started, it was a very different time for the window treatment industry. John Wood (original founder and previous owner of Wagga Blinds & Awnings) and Ray Watson (Watson Blinds) first met at an industry trade show in the late 80’s and were both running small businesses at the time. With growing frustrations and limited access to products and suppliers, as well as manufacturing costs within the Australian Market, they thought to themselves that others in the industry must also be struggling with the same challenges.

“We didn’t know exactly what we wanted to create, but we knew we wanted to talk to some other business owners that were having the same challenges as we were, and maybe we could start a buying group” says Ray Watson, Watson Blinds.

Soon after the initial thought, they approached other businesses in the industry and when interest peaked, a formal meet and greet was organised in Sydney, which resulted in further interest by all attendees and those met as a result of these connections.

Then named “The Independent Home Improvement Group” began to form but heavily relied on the business owners volunteering their spare time and business resources to help gain traction. Over time, the group gained interest with new members and suppliers which resulted in branching out and renaming the group, Fashionline.

The next challenge was to negotiate with supplier Rollease Acmeda, known then as Sbriggs. The negotiations resulted in placing an order for a 40ft shipping container filled with vertical blind componentry. Once an order was placed, the next step was to negotiate and form a partnership with textile supplier Bradmill Textiles. Until this partnership was formed, blind makers communicated with canvas wholesalers, it was unheard of dealing with a canvas manufacturer directly, which was something that made Fashionline unique.

Today Fashionline is ran by a board of directors and has grown immensely. We have 27 members (and growing each year) that have access to 23 unique suppliers across Australia. We are very proud of what Fashionline has accomplished over the last 30 years and we look forward to watching the company continue to grow.